A leopard never change its spots. That is what exactly is happening right now. Kelvin Han is conducting 'live' trading sessions just after his release from prison. You can see from his earlier posting that he is not sorry at all for losing the money and still claims that he is the 'victim'.

I remember crossing swords with him very frequently when he was still known by the nick of toptrader10 in Shareinvestor.com. At that time, his traits of irresponsible calls and stock picks already showed and that really irks me and frankly, i wasnt surprised or shocked as i know it is a matter of time he will end up in jail.
If Kelvin Han is teaching people how to lose money, then i wouldn't have called him a cheat and a fraudster. AND if he loses his own money, i wouldnt have care much either but to lose $700,000 of other people's hard-earned money, i call that total irresponsibility and a man with no morals. I would have thought that he have learned his lessons after serving time in jail but apparently i am wrong and his "passion" to con people is stronger than ever. For the sake of yourself, please trade with your own money and stop worrying about paying back the bad debts. I am sure your ex-"investors" have already written off their losses and your future potential investors will probably thank you for it...
Let me quote you a paragraph from "Trading for a living by Dr. Alexander Elder".
"Many losers think that they would be successful if they could trade a bigger account. All losers get knocked out of the game by a string of losses or a single abysmally bad trade. Often, after the amateur is sold out, the market reverses and moves in the direction he expected. The loser is ready to kick either himself or his broker: Had he survived another week, he might have made a small fortune!
Losers take this reversal as a confirmation of their method. They earn, save, or borrow enough money to open another small account. The story repeats: The loser gets wiped out, the market reverses and "proves" the loser right, but only too late - he has been sold out again. That's when the fantasy is born:"If only i had a bigger account, i could have stayed in the market a little longer and won."
Some losers raise money from relatives and friends by showing them a paper track record. It seems to prove that they would have won big, if only they had had more money to work with. But if they raise more money, they lose that, too - it is as if the market were laughing at them!
A loser is not undercapitalized - his mind is underdeveloped. A loser can destroy a big account almost as quickly as a small one. He overtrades, and his money management is sloppy. He takes risks that are too big, whatever the size of his account. No matter how good his system is, a streak of bad trades is sure to put him out of business." - Dr Alexander Elder.
For those who is prepared to pay the $98 'session', may i suggest you spend $338 to attend this seminar instead or read his book. It might just change your trading life and you will thank me for it. 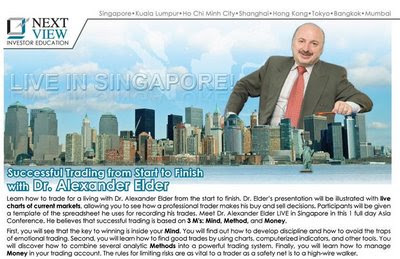 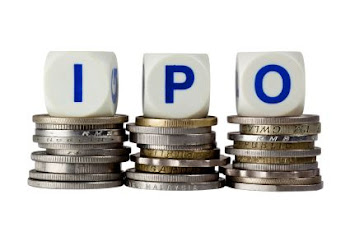